The Seven Benefits of Meditation

There are a number of benefits of meditation, many of which most people simply aren’t aware of. However, by spending some time every day in meditation, you’ll be surprised at how much good it will do your mind and your body.

These are just 7 benefits of meditation of many others:

One of the biggest and most obvious benefits of meditation is a reduction in stress. As you meditate, you actually begin to get control over your emotions which can reduce feelings of anxiety. Since there are a huge number of people that are currently using anti-anxiety medications and the number keeps going up, it’s clear that anxiety is something that needs to be addressed.

One thing that many people have found once they start meditating is that it encourages them to live a healthier life. Some people are able to quit smoking just by meditating, and others simply begin to crave more natural foods. Imagine how much healthier you could be if taking some time to meditate was all that it took to give you a desire to eat healthy.

This is something that has been studied in depth by some researchers, and it has been discovered that people who meditate are not only able to concentrate better, but they’re also able to multitask much more easily, which means getting a lot more done in a shorter amount of time. As meditating allows you to center yourself, you can better focus on everything you need to do.

For many people, it can be hard to accept themselves, whether it’s accepting who they are as a person or physical problems. But either way, meditation can help you accept yourself as you are. This can then make you a better person and allow you to more confidently share yourself with others, leading to deepening of relationships.

Another physical change that happens in your body as you meditate is that blood pressure is lowered as nitric oxide is released, which increases blood circulation. In one study, 2/3 of participants were able to lower their blood pressure through meditation enough that they were able to stop taking blood pressure medicine. Other studies show that the immune system is also boosted by meditation.

Although there’s no evidence that meditation can lengthen your life, it does keep your brain from aging. In fact, a study done at Harvard University showed that those who meditate have larger quantities of brain cells and their brains actually physically stopped aging. It’s uncertain exactly what causes this, but it’s clear that meditation has a profoundly positive impact on the brain. 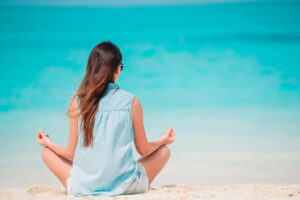